THE HOMERIC HYMNS IN THE ASTRAL MAGIC 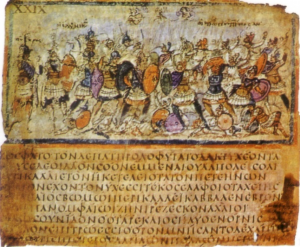 Homer was an ancient Greek poet who lived around 7th century BC. There are opinions that Homer was Thracian as Orpheus. Homer was completely blind, but created Iliad and Odissey and other poems, which are based on the real facts from the Trojan War.

Homer’s poetry passed the test of time and reached us from the 7th century BC through the Homerics- people who studied his poems by heart and shared it with the others. 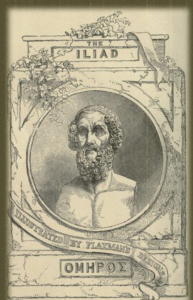 His hymns as the hymns of Orpheus are so beautiful and heavenly that are being used for centuries by the astral magi’s for invoking the planetary spirits. Here are some of them that can be recited and quoted when inviting the rulers of the seven planets.

I will sing of stately Aphrodite, gold-crowned and beautiful, whose dominion is the walled cities of all sea-set Cyprus. There the moist breath of the western wind wafted her over the waves of the loud-moaning sea in soft foam, and there the gold-filleted Hours welcomed her joyously. They clothed her with heavenly garments: on her head they put a fine, well-wrought crown of gold, and in her pierced ears they hung ornaments of orichalc and precious gold, and adorned her with golden necklaces over her soft neck and snow-white breasts, jewels which the gold-filleted Hours wear themselves whenever they go to their father’s house to join the lovely dances of the gods. And when they had fully decked her, they brought her to the gods, who welcomed her when they saw her, giving her their hands. Each one of them prayed that he might lead her home to be his wedded wife, so greatly were they amazed at the beauty of violet-crowned Cytherea.

Hail, sweetly-winning, coy-eyed goddess! Grant that I may gain the victory in this contest, and order you my song. And now I will remember you and another song also.

Of Cytherea, born in Cyprus, I will sing. She gives kindly gifts to men: smiles are ever on her lovely face, and lovely is the brightness that plays over it. Hail, goddess, queen of well-built Salamis and sea-girt Cyprus; grant me a cheerful song. And now I will remember you and another song also.

Of Pallas Athene, guardian of the city, I begin to sing. Dread is she, and with Ares she loves deeds of war, the sack of cities and the shouting and the battle. It is she who saves the people as they go out to war and come back. Hail, goddess, and give us good fortune with happiness!

I begin to sing of Pallas Athene, the glorious goddess, bright-eyed, inventive, unbending of heart, pure virgin, saviour of cities, courageous, Tritogeneia. From his awful head wise Zeus himself bare her arrayed in warlike arms of flashing gold, and awe seized all the gods as they gazed. But Athena sprang quickly from the immortal head and stood before Zeus who holds the aegis, shaking a sharp spear: great Olympus began to reel horribly at the might of the bright-eyed goddess, and earth round about cried fearfully, and the sea was moved and tossed with dark waves, while foam burst forth suddenly: the bright Son of Hyperion stopped his swift-footed horses a long while, until the maiden Pallas Athene had stripped the heavenly armour from her immortal shoulders. And wise Zeus was glad. And so hail to you, daughter of Zeus who holds the aegis! Now I will remember you and another song as well.

Ares, exceeding in strength, chariot-rider, golden- helmed, doughty in heart, shield-bearer, Saviour of cities, harnessed in bronze, strong of arm, unwearying, mighty with the spear, O defence of Olympus, father of warlike Victory, ally of Themis, stern governor of the rebellious, leader of righteous men, sceptred King of manliness, who whirl your fiery sphere among the planets in their sevenfold courses through the aether wherein your blazing steeds ever bear you above the third firmament of heaven; hear me, helper of men, giver of dauntless youth! Shed down a kindly ray from above upon my life, and strength of war, that I may be able to drive away bitter cowardice from my head and crush down the deceitful impulses of my soul. Restrain also the keen fury of my heart which provokes me to tread the ways of blood-curdling strife. Rather, O blessed one, give you me boldness to abide within the harmless laws of peace, avoiding strife and hatred and the violent fiends of death.

TO THE SON OF CRONOS, MOST HIGH

I will sing of Zeus, chiefest among the gods and greatest, all-seeing, the lord of all, the fulfiller who whispers words of wisdom to Themis as she sits leaning towards him. Be gracious, all-seeing Son of Cronos, most excellent and great!

I sing of Cyllenian Hermes, the Slayer of Argus, lord of Cyllene and Arcadia rich in flocks, luck-bringing messenger of the deathless gods. He was born of Maia, the daughter of Atlas, when she had made with Zeus, — a shy goddess she. Ever she avoided the throng of the blessed gods and lived in a shadowy cave, and there the Son of Cronos used to lie with the rich-tressed nymph at dead of night, while white-armed Hera lay bound in sweet sleep: and neither deathless god nor mortal man knew it. And so hail to you, Son of Zeus and Maia; with you I have begun: now I will turn to another song! Hail, Hermes, giver of grace, guide, and giver of good things!

And now, O Muse Calliope, daughter of Zeus, begin to sing of glowing Helios whom mild-eyed Euryphaessa, the far- shining one, bare to the Son of Earth and starry Heaven. For Hyperion wedded glorious Euryphaessa, his own sister, who bare him lovely children, rosy-armed Eos and rich-tressed Selene and tireless Helios who is like the deathless gods. As he rides in his chariot, he shines upon men and deathless gods, and piercingly he gazes with his eyes from his golden helmet. Bright rays beam dazzlingly from him, and his bright locks streaming form the temples of his head gracefully enclose his far-seen face: a rich, fine-spun garment glows upon his body and flutters in the wind: and stallions carry him. Then, when he has stayed his golden-yoked chariot and horses, he rests there upon the highest point of heaven, until he marvellously drives them down again through heaven to Ocean. Hail to you, lord! Freely bestow on me substance that cheers the heart. And now that I have begun with you, I will celebrate the race of mortal men half-divine whose deeds the Muses have showed to mankind.

And next, sweet voiced Muses, daughters of Zeus, well-skilled in song, tell of the long-winged32 Moon. From her immortal head a radiance is shown from heaven and embraces earth; and great is the beauty that ariseth from her shining light. The air, unlit before, glows with the light of her golden crown, and her rays beam clear, whensoever bright Selene having bathed her lovely body in the waters of Ocean, and donned her far-gleaming, shining team, drives on her long-maned horses at full speed, at eventime in the mid-month: then her great orbit is full and then her beams shine brightest as she increases. So she is a sure token and a sign to mortal men. Once the Son of Cronos was joined with her in love; and she conceived and bare a daughter Pandia, exceeding lovely amongst the deathless gods. Hail, white-armed goddess, bright Selene, mild, bright-tressed queen! And now I will leave you and sing the glories of men half-divine, whose deeds minstrels, the servants of the Muses, celebrate with lovely lips.

I begin to sing of Asclepius, son of Apollo and healer of sicknesses. In the Dotian plain fair Coronis, daughter of King Phlegyas, bare him, a great joy to men, a soother of cruel pangs. And so hail to you, lord: in my song I make my prayer to thee!